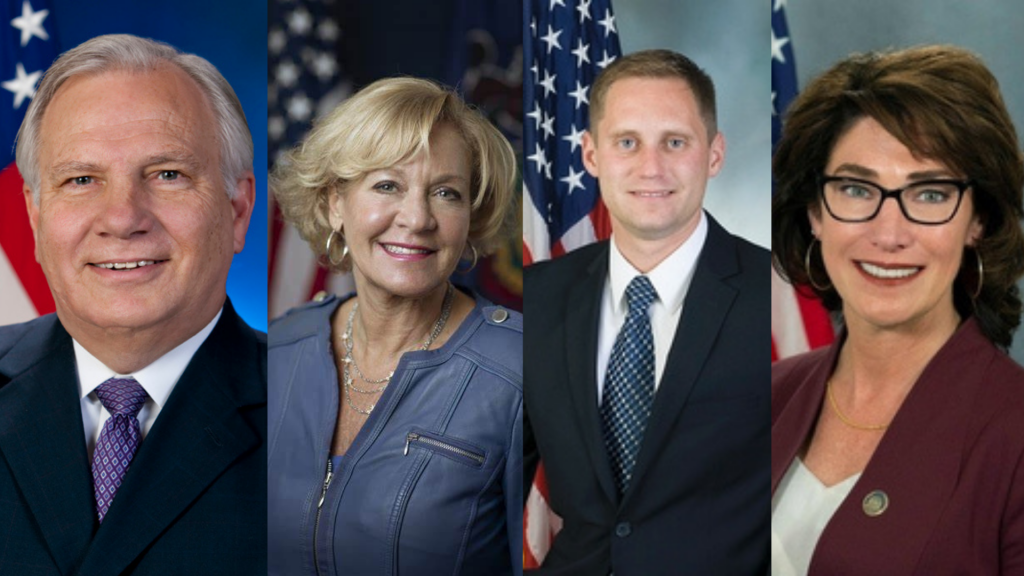 Bi-Partisan Caucus Supports Community Colleges and the Students, Employers and Communities they Serve

The Pennsylvania Commission for Community Colleges (PACCC) is pleased to announce the co-chairs of the Community College Caucus for the new legislative session: Sen. Bob Mensch (R-24), Sen. Lisa Boscola (D-18), Rep. Zach Mako (R-183), and Rep. Mary Isaacson (D-175). The co-chairs provide leadership to the Caucus, which serves as a forum to explore policy initiatives and funding opportunities and supports statewide activities including an annual community college day.

The bi-cameral, bi-partisan Community College Caucus was established in the House in 2005 and expanded to the Senate in 2009, in order to provide information and research to members of the General Assembly on issues relating to Pennsylvania’s community colleges and the communities, students and employers they serve. Co-chairs serve a two-year term.

“These officials are highly respected within their community, deeply invested in our mission, and profoundly dedicated to the success of Pennsylvania’s community colleges,” said Elizabeth A. Bolden, president & CEO of the Pennsylvania Commission for Community Colleges. “These State Senators and Representatives understand how critical it is to leverage the expertise and experience of community colleges to offer affordable transfer programs and career-focused workforce training courses. We are so grateful for their dedication and support.”

Sen. Bob Mensch represents the constituents of the 24th District (including parts of Berks, Bucks and Montgomery counties) bringing to the state Senate more than 35 years of business and management experience, coupled with political leadership and public service. Sen. Mensch was elected by his Republican colleagues to remain Majority Caucus Chairman for the 2021-2022 legislative session, where he will preside over Republican caucus meetings to discuss bills and amendments and to develop caucus strategy. Montgomery County Community College is the primary community college serving the 24th District.

Sen. Lisa M. Boscola has spent the majority of her professional career working to improve the lives of Lehigh Valley residents. Born in Bethlehem, Sen. Boscola is the proud daughter of a steel worker and a Northampton Community College graduate, a life-long resident of the Lehigh Valley and a graduate of Freedom High School and Villanova University. Representing the 18th Senatorial District, Sen. Boscola focuses on the need for state government to promote economic development initiatives that provide family sustaining jobs to the residents of the Lehigh Valley. Due to this focus, Sen. Boscola has been a champion of the Commonwealth’s Community Colleges as they have been leaders in providing quality educational instruction and vocational resources for those young and old who wish to further their education and professions. Community Colleges have long filled this role and she is proud to be an ardent supporter of their collective cause and purpose. Northampton Community College and Lehigh Carbon Community College serve the 18th District.

Fighting for property tax reform, job creation and infrastructure improvements, Rep. Zach Mako is serving his third term in the Pennsylvania House of Representatives. Rep. Mako currently serves on the Appropriations, Finance, Professional Licensure, and Veterans Affairs and Emergency Preparedness committees. He is also a member of the Pennsylvania Military Community Enhancement Commission.

A graduate of Northampton Area High School, Rep. Mako joined the Pennsylvania National Guard in January 2008. As a Chinook helicopter pilot, he was deployed to Afghanistan in December 2012 for nine months supporting Operation Enduring Freedom. In 2016, he was selected to be an adviser to Estonia’s top military officials. Three years later, he was deployed to the Middle East to serve as part of Operation Freedom’s Sentinel. While serving our country, Rep. Mako completed his associate degree at Northampton Community College and his bachelor’s degree in finance from Kutztown University in December 2015. Northampton Community College and Lehigh Carbon Community College serve the 183rd District.

Rep. Mary Isaacson was elected state representative for the 175th District in Philadelphia in November 2018, serving the areas of the River Wards along the Delaware River from Old Richmond to Queen Village and points in between including Chinatown and historic Washington Square. She is currently serving her second term and is Vice Chair of the Democratic Policy Committee as well as a member of the Education, Environmental Resources, and Liquor Committees. Rep. Isaacson has worked her entire adult life on issues that impact her neighbors and communities of the district she now represents. Her top priorities include education funding, charter school reform, protecting our waterways and clean air, commonsense gun legislation, fighting for LGBTQ and women’s rights, affordable healthcare for all and a government that is transparent and accountable to citizens, particularly in redistricting and campaign-finance reform. The Community College of Philadelphia is the primary community college serving the 175th District.